The Bluebelt blues and how to overcome them

I asked a good friend what they would like me to write about. This was one of his suggestions – dealing with the Blue belt blues. Truth be told, it has been a while since I thought about this. There are quite a few articles out there already on this, how would I deal with it if I was in that position again?

A quick definition for those of you that don’t know. The Blue belt blues is a phenomenon noted within the BJJ community. Often, White belts will put so much into getting their Bluebelt, then disappear from the mat, from their club, from jiu-jitsu, sometimes never to be seen again.


Why does this happen?

I don’t think I had the blue belt blues but I did end up taking a few years off (so perhaps I did).  Shortly after I got to blue, the gym shut. I was gymless. I was travelling with work a lot and couldn’t train much anyway. I tried a few other places but nowhere was the same, I missed the vibe. I decided to go and do some standup, I spent the next couple of years doing Muay-Thai and the odd Jits session here and there.  I like to focus on one thing at once.

Coming back to "why" in general

I think that people put so much into getting their blue belt, it becomes an obsession. People get very hung up on it, I get why though. None of us really like being on the bottom rung of a ladder, especially when the ladder leads to efficiently kill people.  Perhaps when people get there, they are just burnt out, they decide to take a little break, after all, they've earned it. That is when my next thought kicks in.

Perhaps for some, it is intimidating coming back to the mat and putting on that belt? There is a deal of unspoken ego in Jits, the aftermath of gradings bring out a lot of it I think.  Although I think it becomes less of an issue after purple belt.

For example, the white belts that didn’t grade to blue all want to prove to their instructor that they too are worthy of a look in next grading (this doesn’t influence your instructor's decision by the way [if it does, you are in the wrong gym]). The old blue belts have to defend their turf, after all, they have their eyes on purple and don’t want you showing them up (see the earlier bracketed point, basically no one cares who you tap or get tapped by). You, on the other hand, are wearing your big boy pants blue belt and need to let people know you are worthy of those pants.

My point? Knowing that this is what you might be walking into is intimidating (for your ego). Now if you add to the fact that you have taken time off after grading, coming back to the mats can look even more daunting.


How would I overcome this hump?

When I used to travel with work, I would try to visit different clubs in the country I was in (usually the US).  Walking into a new club is hard as a coloured belt. Everyone wants to test their wares, to benchmark, to see how good they are against a stranger. For a while, I fell into this trap and as usual, got injured. I don’t remember where I picked this up or if I just had enough and started doing it.

Every new person I rolled with, the first time I rolled with them, I tapped. Let them get it out of their system (if it is in their system). I call this a “humility tap”. After all, who is counting? Who cares that I tapped? I'll tell you who only MY EGO and perhaps theirs (but I'm not them).

I still do this now, I did it after I graded to purple belt, I will do it when I grade to brown belt and whenever I visit a new gym.

I have another ego check I like to do in the gym.  I ask my partner to pick a sub for me to start in then try and escape. I make no attempt to sub my partner, just get out of their sub attempt and reset. Or I ask what dominant position they want and go from there.

I like this for a few reasons, it keeps my ego in check (we all have one but mine needs to be kept in its cage), it lets my partners work their subs and dominant positions and keeps me on point with my escapes.  Win:Win all round.  Don't take me wrong here, I still compete, I still try and escape.

Another angle to the Blue belt blues might be that you are a bit lost, you don’t have a direction to follow or take your game in. If that is the case, check out my article series on off the mat learning.   Secondly, this article by Matt Thornton has guided me throughout my journey and still does.
Saying that, ask your instructor. What are your weaknesses? Ask higher grades for their insight and feedback? The beauty of Jits is not winning sparring (that is stroking your ego), it is overcoming weaknesses and learning to be efficient (in my opinion).

Here's a brief summary of what I would do to overcome the Blue belt blues:
BJJ Jits Submission Grappling

Ageing Gracelessly – the importance of mobility and conditioning after 30 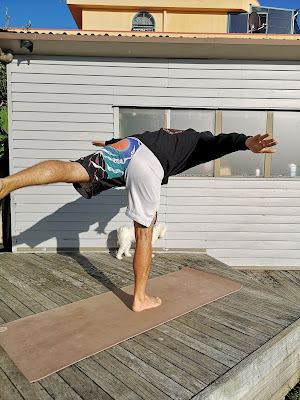 Jiu-jitsu or any live, contact sport is unforgiving on the body (as I have found out) even in your prime.   I have a lot of respect for the guys my age and older just starting out at white belt.  It is a grind, especially when you are confronted with those athletic, strong twenty-year-olds who are trying to pull your head off.     I have picked up really shitty injuries along the way that keep me off the mats if I do not take care of them.  The irony of writing this is that I am injured again because I let life take over and I ignored my mobility and conditioning work  (proving that age and wisdom don’t necessarily come hand in hand).   This article is for the older guys on the mat, perhaps I have something of value to contribute?  Maybe by sharing how I see training these days and the methods I use to keep me on the mats there will be something you can use?  Let's find out.   Ego and Mindset I think the ego comes into play a lot as we age, especially for men. I like to
Read more

Jits fundamentals, why you need them and how to find them 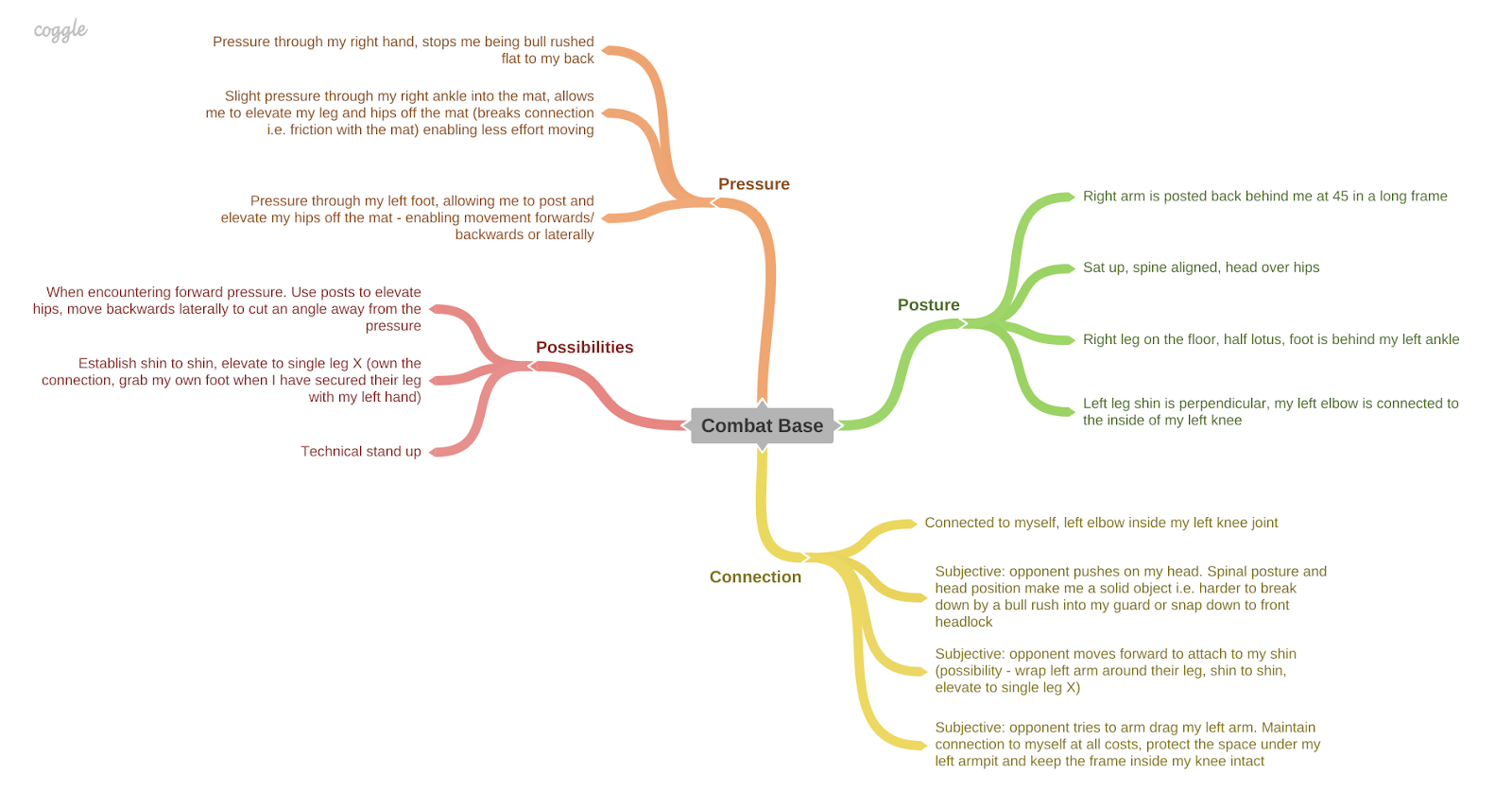 Basics, fundamentals, foundations, first principles, essentials, prerequisites, necessities, etc, are today's subject. My mission is to try and explain why fundamentals are key to becoming the best you can be on the mats. My first series of articles talked about off the mat learning, my favourite theme. I selfishly neglected the fundamentals, in hindsight, this article should have come first.  Fundamentals are after all, arguably the most important part of Jiujitsu (or anything for that matter).   Why is that? The simple answer, (as I understand it and think of it) is that the basics run through everything we do on the mats. That flashy heel hook entry you are learning from John Danaher or Lachlan Giles, that complex worm guard sequence from Keenan online; all have their roots in the fundamentals of Jiu-jitsu. For example Let me try and give an example of what I am driving at. Say I watch a Neil Melanson YouTube video showing a really cool Darce choke from side contro
Read more

Before lockdown, I was working towards getting my weight down to ninety-two kilos.   Then lockdown hit and I put on six very unwelcome kilos, pushing my weight up to one hundred kegs.   This had to change, I knew what to tweak (stop eating cake, drinking alcohol and get back on the mats).   To turbocharge my weight loss I decided to start intermittent fasting. In this article, I am going to share what I know about IF, how I am doing it and my results so far.   As with anything health-related, please seek professional medical advice before trying it.   What is Intermittent Fasting? Intermittent Fasting (IF) or “skip breakfast” as I think of it, is the practice of not eating for a set period of time, then eating for a shorter period of time.   I think of these periods as my “fasting window” and my “eating window” There are quite a few different IF methods/ models/ plans out there.   I have listed the most popular methods below.   If you are looking for more details on the method
Read more